This week saw the production (ha!) of two videos. One on a Copperplate Minuscule (lowercase) and one on a little fiasco we had. More of that later.

The Copperplate Vid is on You Tube at ……. and still debating on whether on not to put up the other vid!

Caroline Perry dropped by to collect a design for ‘something’ I did for her and Gerri from Love&Lord came by to brighten up my day! Came up with a stunning design for her – let’s see how that is going to go. Stunning = expensive to produce! She loved it, awaiting budget from the client!

Had an interesting job as well – to do an invitation like a 14th century Italian Manuscript! So excited. Thankfully we are not dealing with the printing of this thing. I would not know where to begin. The client even asked if it was possible to bind the thing in vellum, real vellum! Oh the joy if they do.

The beginning of the week saw us working on some beautiful little place card and placement envelopes for the lovely Silvia at Lanza & Baucina. The placecards had beautiful gold, gilt edges and came from Mount Street Printers. The card was perfect to write on as usual but the names were SOOOO long we had to write them at 2.5mm in height, instead of the usual 3.25mm.

As well as a last minute job for Rebecca at The Communication Store – 30 placecards needed tomorrow! 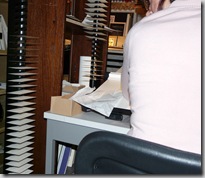 Yep! Those are CD holders. Funny how once something becomes useful you can’t seem to find them anywhere. We have ones that have been cut down so they lay flat too. Will point it out later.

Silvia also asked for some ink and a pen. Unfortunately we used a quill for this job and we don’t use ink if we are colour matching, we use Gouache, an opaque watercolour, so getting the consistency right is key, not to mention sharpening the quill. Thankfully it was not needed but we did send it on. 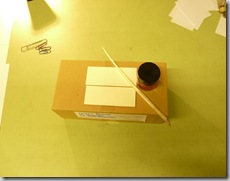 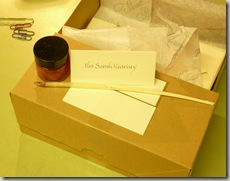 The middle of the week saw me sending off some work for the Calligraphy and Lettering Arts Society Regional Day in York. I am a part of the Spencerian Study Group, lead by the very talented Brian Walker. These are some of the bits I sent off. The script is Spencerian (a 19th century American hand, it evolved out of copperplate, and is the underpinning structure for American handwriting). The decoration and bird flourishing also belong to the script and it’s period. The Bird Flourishing is part of a practice known as Off Hand Flourishing. Sorry about the wonky images! 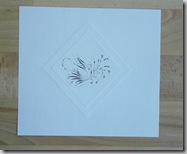 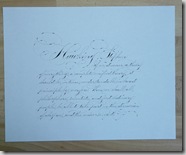 Also had some further certificate for Tony at Fullers. Unfortunately it was not on the usual, wonderful Colourplan but on some AWFUL coated paper, I had to use a marker! OH! and there is the CD Rack I cut in half to work horizontally. The ink, even using a marker, stayed wet for overnight. I am using an Edding marker in this photo, but ended up using a Manuscript Pen Company Italic Marker. The ink was more solid on the coated paper. 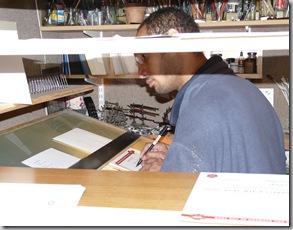 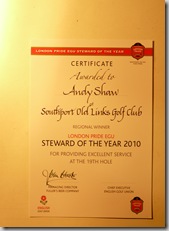 This week also saw me working on some bits to be used in the British Museum’s upcoming Book of the Dead exhibition, where I will be teaching a workshop on the script used to write the book of the dead called Cursive Hieroglyphs. John Taylor and I had a chat about what could be done for the public to touch, and look at up close.  Had to send them some sheets of papyrus, yep, they were just lying around the studio, along with the rushes the ancient Egyptians supposedly used to write this script. There may be some papyrus handling and tearing! Not sure if 5 sheets was enough now. I am currently working on the script’s ductus (stroke number and order), so there is tonnes of the stuff in studio. Also sent on the rush which was used with soot black, again a supposed recipe the ancient Egyptians used. I am hoping they have their own Gum Arabic to put in the exhibition case. This is done on the papyrus we get today which does not look like what was used traditionally, you can see this under the glass at the museum – so much still to do on this! 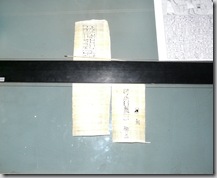 Nazia and Sharv dropped by to talk shop as well as to finally see the studio in operation. Shrav and I had a great time talking lettering possibilities but I also managed to find the time to do a ruling pen ‘Happy Birthday’ for Naz done in blue with gold powder dropped in while the ink was wet.

Had a book insert to do as well. These usually start off with someone asking us to write in the book itself. We always suggest to do the calligraphy on a separate sheet and tip it in, as we never know if the paper of the book will accept ink and the WORST thing is when you touch the ink to the page and it bleeds.  The work was done on, you guessed it, Colourplan! We do these for Wedding Albums too. But it really is in Bibles that this kind of writing is almost impossible, due to the paper, not to me being wicked!

In between all of this the Dior Job arrived - something like 700 envelopes and invitations to address – beautiful black colourplan with our Quick Script III in white ink! We asked for the envelopes while the invitations were being printed. Will put up an example once the envelopes are all completed.

Dealing with the PR Team at Dior is always a joy and when they mentioned what they were planning months ago I was consulted on paper, making our job considerably easier, as we knew we could write on the stationery. If only other PR teams though like this instead of printing the stationery and then sending on impossibly paper to work on, would save so much hair from falling out! Will post a sample of an envelope in next week’s blog. 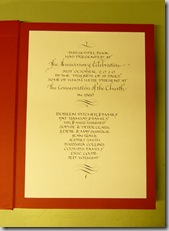 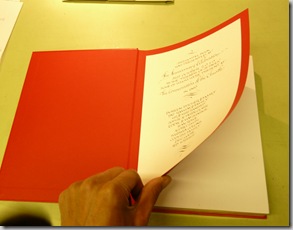 And the week ended with the Fiasco! So we were working on these black envelopes and were sent a very limited stock. Not to mention, the envelopes were square, so not regular stationery. Needless to say, we ended up having to make 20 of them by hand. Fortunately we had the black paper in A2 sheets in studio so Keiko, Angelo and myself set to making them. Thank God for a wonderful team.

This is me making up the template and cutting up the first envelope to see how the scoring, folding and sticking (done with double sided tape) would look when made up into a completed envelope. You could not tell the difference from what we did to the original. Still, this was very labour intensive. 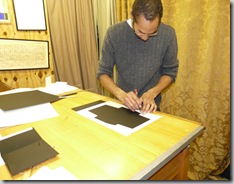 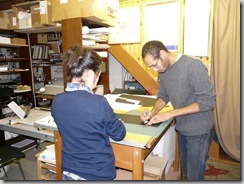 Division of Labour kicked in. Keiko did the drawing from the template unto the black paper and Angelo and I did the cutting down. 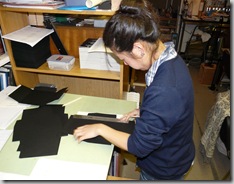 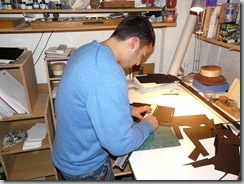 After they were call cut. I scored them and we folded them. Keiko then did the cutting up of the double sided tape and Angelo and I did the sticking down. We all worked on peeling off the white backing and sticking the sides to the back to make up the envelope. Nearly had another fiasco by sticking the top bit to the sides but that was avoided. Talk about a bonding exercise. Sarah complained that we should have waited for her, she is brilliant at this kind of thing, Ruth and Sophie at Ruth Kaye Design can attest to this!

That was the end of the week for work.

All this time we are sitting here awaiting the TwinWall Sheeting to place on the glass to arrive. It will help with the heating in the upstairs of the studio – where all the admin work and stationery is put together. Currently it is freezing and as winter is almost upon us it is not fun.

The following week sees us starting work on the square, black envelopes, but that will be the next posting!

We got back from the Lake District all excited and invigorated. I came up with some new ideas based on what I had seen at the paper mill and what I was able to discuss with Alyson from GFSmith. But also  from what I saw at the Designer Wedding Show the previous week.

Thanks to the team at the DWS as well as our friends on the By Appointment Only Design, Javier and Tony and Team: Helen at The Walton Street Stationery Company: Britta at The Couture  Gallery for putting up with us!

Here is some of the work that happened this week 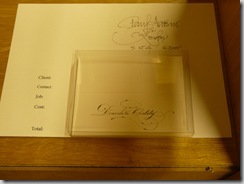 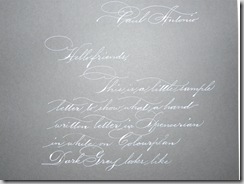 More Spencerian in our colours – white on grey. All the letters to the guys at the mill, and the staff at GFSmith were done like this and sent off. 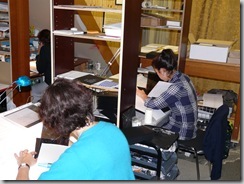 Nicola and Keiko beavering away. My mum is also in the corner, under the stairs, learning basic, upright italic.

It seemed this week ended with certificates galore! The ‘London Business School’ ones were A3, I could not believe it, these were done in our own ‘Kensington Script’. This is the standard ‘Princes Trust’ ones where all the text is handwritten in copperplate. The ‘Fullers’ certificates were in their usual 'upright italic.

They were all left ready for Sarah to proof read on Monday. And that was last week!

Posted by Paul Antonio Scribe at 09:12 No comments:

What we work on

It is funny how this blog started.

I am in the process of work on some little vids for the website, yes, I know it is still a holding page! And so been in touch with some of our suppliers to get samples to play with.

This has started a series of visits to where things get made and what better way to start the blog.

On Monday and Tuesday last week (11th and 12th October) we, Angelo, Alistair and I, went off to James Cropper Plc with the lovely people from our paper supplier, GFSmith to see how Colourplan, the main paper we use, is made. 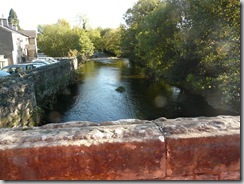 The view from the bridge! Below is the outside of the mill. 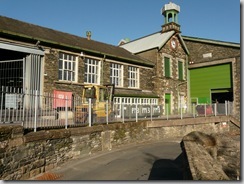 Bales of Colourplan awaiting recycling, I nearly fainted. And there, embedded in all that colour was my Tabriz Blue (which our ‘Thank You’ cards are currently being printed in – will be available for sale soon!)

The next thing we saw what the pulped paper, so beautiful and clean. 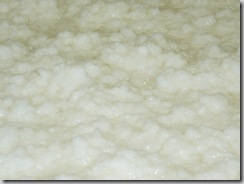 And this is what it comes wrapped in! 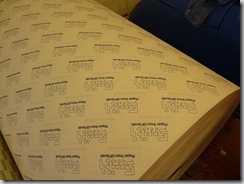 We stayed on at a beautiful hotel on the shores of Lake Wyndemere with the other attendees talking about Paper. Thanks so much to Alyson Hurst and Beth Powell at GFSmith!

Posted by Paul Antonio Scribe at 08:39 No comments:

Blog at the Beginning

Well finally we have a blog!

After so many people asking us to start one I finally gave in. Note that Sarah will be dealing with updating this, not me.

We will aim to update it ever Monday.

If there is anything you would like to see, please do let us know.