Where has the month gone? I had such good intentions to write and update the blog weekly and a whole month has gone now and not one week was put on. I decided that it would be for the month but it is already the beginning of the second week in February! So you will have to forgive the long posting. 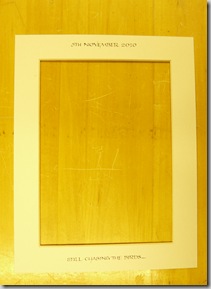 The month began quietly, and getting over 3 weeks of the flu.

We started off with a small job for an existing client who needed some text written on a textured frame.

Not a difficult job but having not done any calligraphy for absolute weeks, my hand was not in it – in the end I had to rewrite it, on a trial sheet about 6 times to get the centring correct and the letters even and looking like I did them.

Sarah’s arm is still in pain but getting better, and she is off to Sicily soon.

The Monday saw us ordering stocks of placecards, placement envelopes and escort cards. 500 of each in white and oyster – in anticipation for requests. It is a large outlay but well worth it when last minute work comes in.

By Appointment Only Design’s letters arrived for us to place names and text on the for the event on the 11th of Feb. I will have to do a special blog on the stationery we prepared for this event. But here is the ‘Save The Date’ and the ‘List of Contributors’ 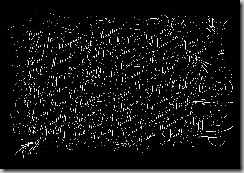 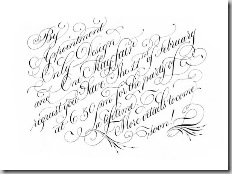 You’ll need to click on the white on black one to see it better. Completed the design for the event and sent it off to print. It is on colourplan ebony by GFSmith, printed by Rachel at Mount Street Printers and laser cutting by Cutture. What a process. Started working on the stationery to be used in the show itself! More on that in another blog.

The week also saw Ali and I heading off to the new Cirque de Soleil at the Albert Hall. Working on a big design job but have little hopes for it as the client is not playing by the rules: have spoken with the bookbinder, the metal cutters, a box maker and a velvet manufacturer to get quotes but without knowing what we need to do exactly, and a budget, it is proving stressful, also found some more grey hairs in my beard! Must be this big job. 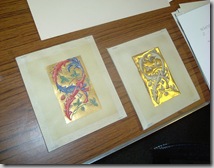 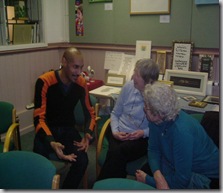 Saturday the 6th saw me giving a lecture to the Lingfield Scribes and seeing my good friend Sue again. She always warms my heart. This is me waffling on about how I got to where I am now and some of the work we do in studio. I had a great day out and met some wonderful people.

The 10th saw work starting to pour in, thankfully. We, and I say we not I, as I am now referring the all of us who work at PaulAntonioScribe, have not had that much work on and even though I know the work will come in, this month has been really stressful, with tax to pay coming due and the idiots at the tax office not giving a damn. I just don’t understand how they can make demands on people paying taxes and then not answer the phone and when you do get through to them they have no idea what they are talking about – what are they getting paid for? I’ll stop my rant there. Thankfully our accounts at BKL know what they are doing and can offer sound advice. 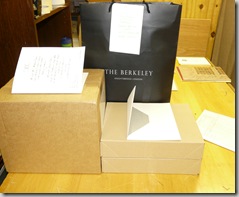 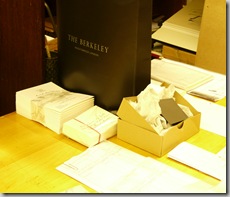 So the work has started – we have a job to do for Linda Cooper. Linda always knows what she wants so there is no run-a-round, the work comes in, the list is sorted as we need it and it gets done, proofread, and sent on, additions are kept to a minimum and then only sent in one go. She subsequently told me the client loved the work. That is always good to know! This week also say us writing some names in beautiful Smythson Books for Christine and Simon at the Berkeley. There was also a small job, done by a calligrapher in the USA which needed USA added on every envelope. The bride said it would have been good if the calligrapher had realised she was posting them from the UK. I was quick to point out that it was really her responsibility to send a correct list.

I make it a point to let clients know it is not our job to correct their list because once we start correcting the things we do know, when we miss something we get it in the neck – your list is your responsibility. It sounds harsh, but once you do it once, that is it! Everyone then hears you will do it, how? I just don’t know.

The 18th to the 24th saw us having to cope without Sarah! BooHoo!but we managed, just. I had to do some invoices myself. Can you believe that? Like I even know where to look anymore! I managed in the end. 300 placecards, placement envelopes and escort cards to do for a private client and, AND the VideoJug vids I made last year were launched at the VideoJug website

I only found out as emails started coming in. Promised to get the originals to send to Linda at The Manuscript Pen Company, Paul at Windsor & Newton and Alyson at GFSmith for all the tools and materials they sent for the vids. We watched some of them in studio and had a giggle.

And the jobs keep coming in. We had some work to do for Gee Brothers, Mount Street and something from Smythson as well – all that lovely blue! 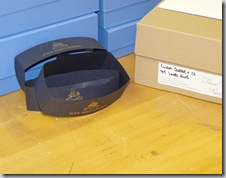 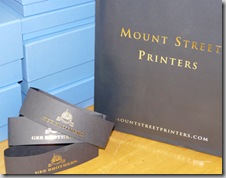 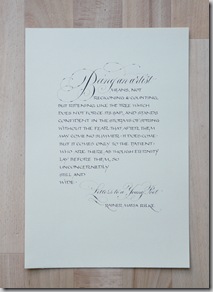 A poem job came in which needed to be in an A4 frame so did not want to chance Title Case letters and opted for something I did before Christmas.

This combination of a large decorative cap or word, or in this case the first line of the text, coupled with our small caps works really well when a small piece of paper is needed.

I sent this to another client who promptly requested his be done like this but on an A5 sheet of paper. I had to tell him ‘no’ as he had much more text than I could fit and writing these caps at 1mm is not fun. It seems the more you offer the more people want.

Another 300 placecards, placement envelopes and escort cards job came in, but on white! Thankfully we bought all that stock last week. This time for an event for Catherine at Burberry. Alas, Louise left Burberry in December, and after building that wonderful client relationship with her, I was gutted, and a little apprehensive, but Catherine is as lovely as Louise so almost no change there. 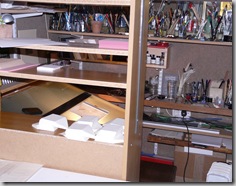 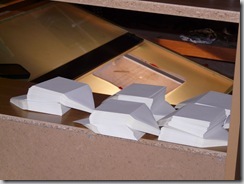 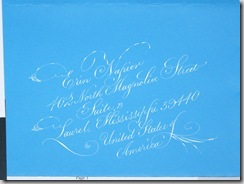 A job we have been working for Gerri at Love&Lord has finally come in. More and more we are getting asked to do all the stationery from the Save the Dates and addressing them, to the invitations (with RSVP Cards, additional party invitations) and addressing the envelopes. The invites and envelopes arrived and the looked stunning. I managed to convince the client white die stamped on colour plan tabriz blue would be magical. What I did not anticipate was how magical! I cant post the work as the wedding is what not yet happened but will show you something which approximates it. This is an envelope yet to be sent off to the gifted Erin! You must visit her blog at - 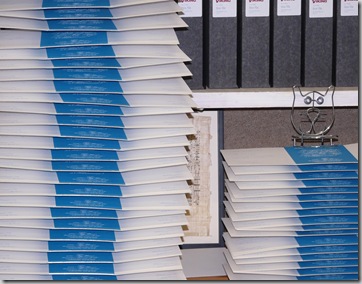 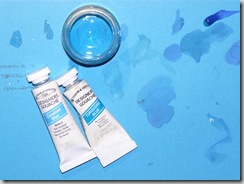 Working with GFSmith’s Tabriz Blue is a joy, but matching it colour is a nightmare, unless one is using Windsor & Newton gouache for the mix. So here is the mixing and the sample. I also used the Titanium White for opacity and their gum arabic to improve binding. I had a also add some Ox Gall to improve flow – it was a real test but produced a stunning result in the end. Paul at Windsor & Newton also suggested using some Copic White – can’t want to get that!

And of course, January is the BAFTAs. We work with the BAFTAs and Asprey on the nominees party and once again Deena and Loren were sending emails of impending invitations. It really does put a smile on my face dealing with people I have worked with over a period of time. 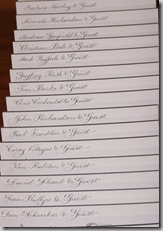 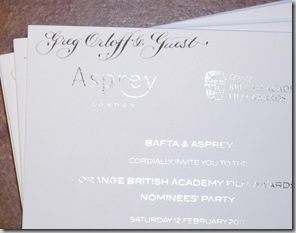 I had a request to allow a film crew to come film and talk with me about working on the invitations. They wanted to film me writing Colin Firth’s name, and I must confess to feeling a little overwhelmed, especially after seeing ‘The King’s Speech’.

And that was essentially January 2011, of course with the St James’s Partnership dinner thrown in and all the work for the event an One Mayfair see the below links

I will do a special blog on what is being done for the show, but do remember the 11th to the 13th is The Designer Wedding Show at Battersea Park, and boy do we have some stuff planned for that.