Once again the blog is late – I am going to have to get someone in to start doing this – but seriously, we have little images of what was done in May as it was fairly standard work with the standard work – Placecards, placement envelopes, escort cards and envelope and invitation addressing. Those were the standard, usual things. But the reason there are not that many photographs is there seemed to be a proliferation of people wanting us to sign Nondisclosure Agreements. And with the events leading up to May I am sure you can work out at least two of them on your own. 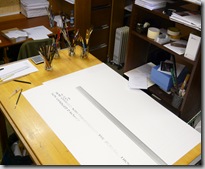 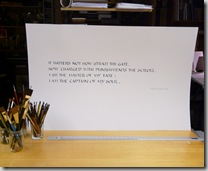 This was a massive bit of paper I was asked to work on. It was a present to a client’s husband. Am looking forward to seeing an image of it framed and in situ.

Last month ended a 10 week course I was studying on. The course was run by........... on Arabic Decoration. It was spectacular. It also gave me so much food for thought and I started to work on incorporating some of the intent of the designs, and in some cases, the designs themselves, into my western calligraphy. This was to be the crux of the work I am seemed to be aiming for on the Society of Scribes and Illuminators Advanced Training Scheme, of which this is my third and final year. The course is about self development and why you do calligraphy. It has been a real challenge, a wonderful one at that. I wont post any images as yet though, well not until I have some finished work.

The month began with us finishing off a job for the delightful Amaury at Ralph Lauren. Such a gentleman to deal with. The first week saw us finalising the designs for Joelle Rashti’s wedding. I think I might have to do a separate blog on that.

Mathew Bates has moved from Fulham Palace to ‘the Royal Society of Arts’ and we are looking forward to work with him there. And the suppliers list grows!.

We had a job to do for Dior as well which was a rushed job, but it did give me the opportunity to work with Charlotte again. 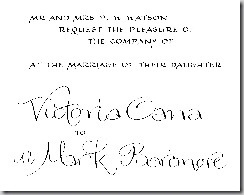 A last minute change due to printing issues, Victoria Watson, a good friend of the lovely Daniel Marks at The Communication Store got in touch with us to deal with her invitations, she is also dealing with Javier and Tony at By Appointment Only Design for her floral details. Hearing of us from two companies made her approach us about her invitations. We were only too happy to assist, the timing was a little tricky as everything needed to be done quickly. I do try to remind clients that the faster you want something the longer it seems to take as so much needs to be pinned down before agreeing to handwriting an invitation. It was also the first time that we printed all the invitations for a job in the studio on our super duper digital printer! We were happy with the results, but more importantly, so was she and her fiancé. Here is half the invitation to show the mix of scripts used.

This week also saw me prepping for a meeting with some publishers who have asked me to write a book on calligraphy. I must confess it is something I had been thinking of for about a year but the sheer scale of the task, and running the studio, made me shy away from it. My mother proceeded to point out to me the nature of this opportunity in that it presented itself and I needed to take it. Alistair was so supportive but a little concerned about the book and my existing work load! Lindy and Isheeta came to see me about my ideas and we all seemed to get over excited. They were great in showing me what an outline would look like and how I needed to plot what I needed to do. I need to add here whilst we were discussing, the feeling of an axe hanging over my head! There is so very much to. I was asked to prepare the table of contents and a sample chapter of one of the scripts by the second week of May. So no pressure there!

Midweek saw me at the wonderful Peggy Porschen Cake Shop to talk about some lettering they are thinking of using for some signage. It is not necessarily a good thing when creative people get together our brains start churning, out came the writing tools and Peggy, Bryn and I were laughing like children.

Wednesday evening saw me at the Bluebird Wedding Event organised by the beautiful Sarah Widdowson. What a great event, saw so many people including the lovely Miranda Eason from Cosmo Bride and You & Your Wedding. She promptly introduced me to Stephanie Stafford new editorial assistant who interviewed me for the online magazine. I ended up disclosing some very hush-hush information about the business which I will tell you about soon enough.

Zoe Couper’s invitations and envelopes arrived. They were printed using our Spencerian Script and needed the names being inserted in the text – and that meant matching the colour they printed in. Something I sort of take for granted. It was not always that I could match a colour exactly – it has taken about 5 years to know when it is going to be correct. So, Zoe’s invitations and envelopes needed to be done and ready by the end of the week. Printed by Downey and Co on Vellum White Colourplan. They made up the envelopes and lined them in blue – genius. Their work is ALWAYS so well executed. 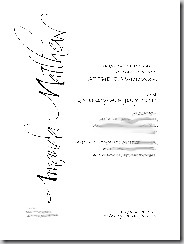 Last year we started working with Amanda Henry for her ‘Save The Dates’ and now came time to produce the invitations. She opted for ivory on dark grey card! The envelopes were addressed to suit, in ivory on dark grey envelopes. We were so pleased with them, as was she!

More certificates to do for the Princes Trust – these are all handwritten in delicate copperplate script.

And Joelle Rashti’s job finalised and sent to print. The main invitation to be diestamped in gold on Vellum White 700gsm, the other two invitations to be letterpressed in antique pink rose on Mist Colourplan 540gsm, RSVP card in white on dark brown, RSVP envelope in dark brown on white, and the envelopes in white Spencerian on Nubuck envelopes. Bliss.

Thea Darricotte formally of Brides Magazine, now at Conde Nast Traveller, had her envelopes arrived as well, did some slanted quick script to get them out and off quickly. Congrats Thea!

The week ended with a call from Harriet from Party Planners. So lovely to deal with. And a call from the girls from Kasimira Party Organisers to do all the stationery for a wedding – two invitations handwritten out and a map hand drawn with handwritten text. I also got a bollocking from my mother. Two months ago I was interviewed by a television crew for a documentary on the Royal Wedding for Living TV in the US.

My mother lives in Trinidad and Living TV is shown there. She only caught a little bit of the interview but it showed again on the Friday so she was able to see all of it. I had a copy sent to me and will see if I can cut the bit with me in it to put on line.

Week three started with 1000 envelopes coming in from Selfridges to be done in one of our modern scripts. It also had a very sad note to it as one of our calligraphers, Nicola, had to deal with the passing of her mother. It was a blow to all of us as we love Nicola so much and knowing she was upset made focused working much more tedious. Sarah also saw a death in her family. Both funerals were planned for the week of the 26th.

The end of the week saw Sarah reminding me that we had a stand at the RSVP show, something which I knew was happening but simply forgot! I nearly fell out my chair when she reminded me and thus began furious preparation for work for the show.

The short week also saw us putting the finishing touches on Britta Kjerkegaard’s (The Couture Gallery) menus, place cards and placement envelopes. We also spoke with Stefania at Ganisbury and Whiting, did a design for Polly at Brides for a mock up of a possibly invite for Zara Philips and one for Kate Moss! Nigel at the Fishmoners’ Hall and a bevy of brides about place cards, envelopes and the like.

And there I was thinking the month was quite!

Posted by Paul Antonio Scribe at 09:04